*This Review is Spoiler Free* 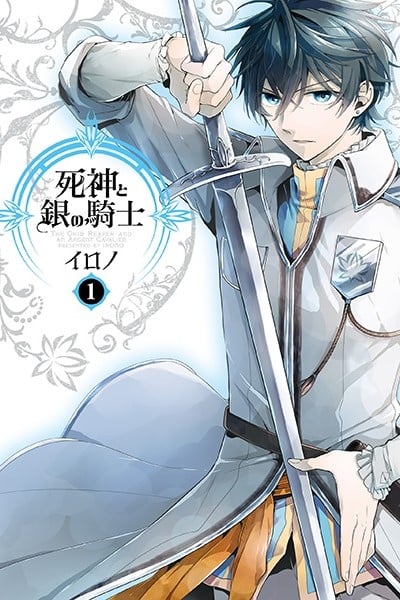 *Sorry, this post is a little late, courtesy of my wondrous procrastination skills. I’ll get to everyone’s comments soon.*

The Grim Reaper and an Argent Cavalier (or Shinigami to Gin no Kishi) is another random pick from Crunchyroll’s online collection that caught the attention of my superficial eye. Well that and the fact I just finished re-watching Kabeneri, wanted more thrilling action and (un?)death, saw the words “Grim Reaper” and went for it.

In a world where humans live at the mercy of the Grim Reaper and the Larvae, his soul-devouring monsters, one young man sets foot on a thorny path to protect everything he holds dear—even if it means falling into darkness himself… Overall the story isn’t bad, and i did enjoy reading it, but I just couldn’t help but feel it could have been MUCH better. While it definitely has some pretty good elements, it occasionally dips into too common tropes (primarily when it comes to the main character: Cyan). This is something I found pretty disappointing, since it really takes away from a lot of the more thrilling moments. Overall the few twists and group of side characters made this a pretty good read. For only about 6 volumes a good amount happens, but I think it would have benefited from being a little longer.

The characters are likeable with a few that genuinely had me wanting to learn more about them. That being said, I actually found most of the other main cast and side characters much more appealing than the two main pair. In fact it is because of them and a few pretty unique elements that made me give this a 7 instead of a 6 rating. The world building didn’t stand out too much for me (I really don’t remember much about it), but those few characters certainly did.

I wanted to review this, but while writing realized I really can’t say much about it without spoiling something 😅 lol, so that’s all I can say about it. I’d recommend this to anyone looking for an entertaining, light, short read to pass the time with. Despite it’s length it’s got a good amount of action, magic, twists, drama, and touch of romance to go with it.